Tactical situations cover a wide range of environments that present a variety of risks to the eyes. These include military, law enforcement, and rescue operations as well as recreational activities. Not only are eyes are the most fragile and vulnerable part of the body but the vision is a crucial component to survival. Therefore, maintaining vision can be the difference between life and death in many tactical scenarios.

Projectiles, shrapnel and particulate matter that is intentionally or unintentionally directed at the face can cause serious harm especially if entering the eye. While ultraviolet (UV) radiation, extreme heat or cold and other natural dangers of harsh tactical environments offer a plethora of risks to eye health. Using the appropriate eyewear is absolutely fundamental to survival in harsh tactical environments of all kinds.

Ballistical threats are the most associated injury with the eye in tactical environments. The statistics show that this risk from projectiles is one of the leading concerns for those operating in such environments. However, there is also a range of other dangers that can put the eyes at serious risk. The natural environment poses risks such as allergens, particulates, and overexposure to UV radiation. The increasing use of chemicals, other artificial elements and lasers also present new kinds of threats.

The eyes are particularly vulnerable to physical dangers from projectiles that could scratch or puncture it. In the tactical settings, this includes free-moving objects, such as a bullet, pellets or debris, propelled from a fixed position, such as a gun or an explosion. However, there is also a risk from fragments, particles, sand and dirt that may be made airborne, carried by wind and other processes.

According to Tactical Weapons journal, approximately 10% of all battle-related injuries to American troops are coming from fragments of IEDs (improvised explosive devices), mortars and rockets penetrating the eye. Overall, the vast majority of ocular injuries on battlefields are corneal foreign bodies, abrasions and eyelid lacerations.

Even very small particulate matter can get caught in the eye causing punctures, abrasions, and contusions of the cornea. In fact, corneal abrasions are the most common type of eye injury in tactical environments, according to the doctors of American College of Emergency Physicians in the book Tactical Medicine Essentials. This risk is especially frequent among SWAT officers. Damage to the eye may range from minor scratches that can heal in several days to more severe abrasions and punctures that can cause permanent damage.

Penetration injuries may permanently scar the cornea resulting in impaired vision. If the projectile penetrates deeper, it could damage the iris, lens and even enter the center of the eye, potentially causing more serious problems. Ballistic eye protection is designed to protect the eyes from a range of projectiles that may lead to the eye trauma, without obstructing the wearer’s field of vision.

The eye’s soft tissue is vulnerable to many chemicals that are common in tactical environments. Acids, alkalis, strong solvents, fuels and cleaning agents are now used in a variety of tactical scenarios. Even short exposure to the mists, vapors, and fumes of many chemicals could be strong enough to cause irreversible eye damage. Conjunctivitis in the eyes of soldiers handling solvents and fuels has become common on the battlefield, for example.

Sensitive eye tissue can also be vulnerable to biological contaminants like bacteria and viruses. According to the Center for Disease Control (CDC), “infectious diseases can be transmitted through various mechanisms, among which are infections that can be introduced through the mucous membranes of the eye.” These include bacteria that can cause conjunctivitis and viruses that can cause systemic infections.

Infectious agents may be introduced to the eye directly, through contact with bodily fluids that can be commonplace in many tactical settings. Such contamination can also occur indirectly when the eyes are touched with contaminated fingers, gloves or other objects. Rescue workers or battlefield medics, for example, deal with a range of injured people and are therefore at greater at risk of infection.

Our eyes are also sensitive to radiation in the form of light and heat. Overexposure to high-frequency UV radiation can cause immediate or cumulative damage to the retina. Burns can also occur when the eyes are in proximity to bright light or high temperatures. This could be from fires, explosions, sparks, and lasers, common in the tactical environment.

Lasers, for example, have become prevalent in battlefields. Between November 2008 and May 2009, the 3rd Expeditionary Sustainment Command (ESC) alone had 64 laser incidents reported, resulting in 45 documented injuries to soldiers. Two of those injuries were permanent and one soldier is now legally blind in one eye, according to Maj. Paul Hayes, 3rd ESC spokesman.

The most obvious tactical environment may be the battleground, which presents a wide range of risks to the eye and general health. However, other tactical settings such as law enforcement operations and rescue operations also pose serious hazards. Risk increases when proper safety eyewear is neglected, common in recreational tactical activities that cannot be excluded.

Military environments include those of the army, navy and air force, and well as special forces and intelligence gathering activities. Hazards posed to eyes have increased with modern warfare. Eye injuries made up less than 1% of total battle injuries in the American Civil War but increased incrementally through World Wars I and II, for example. During the Korean War, the rate of battlefield ocular trauma more than doubled, then rose steadily to about 13% by 1991.

"In recent conflicts, combat ocular trauma stabilized in the 10% to 15% range. A lot of that may be due to eye protection which has been widely implemented," said Walter Reed National Military Medical Center ophthalmologists Col. Raymond Cho. "This is a significant percentage of potentially debilitating injuries."

According to Michael Eldridge, US Marine Veteran and founder of Safety Glasses USA, about 15% of injuries from battlefield trauma are to the eyes. Between 2003 and 2011, Military personnel suffered a total of more than 200,000 eye-related injuries. Approximately 75% of military personnel suffering traumatic brain injury also have eyesight problems.

The problem of eye injuries is even more important to health on the battlefield as 70% of our total sensory awareness comes from sight. Vision is by far the most critical of the five senses, especially in combat conditions, meaning that protecting eyes is fundamental to survival. So high-quality tactical eyewear is critical to success.

It is not just military forces that face dangerous tactical environments, the law enforcement tactical community also places themselves in harm’s way for their work. Law enforcement groups include the police force, civil and private security workers, as well as border control and customs officers, all of which face regular dangers.

Eye injuries specific to law enforcement personnel may be flying debris in an explosive breach, broken window glass and blinding light from the use of flash grenades, among countless other scenarios. The wide variety of settings that law enforcement operates in demands a broad spectrum of eye protection

Rescue workers put their safety on the line to save others. This includes members of the fire department, paramedics, search-and-rescue, and disaster response teams. These first responders are on call for any situation that may arise in which people’s lives are at risk, they need to be ready for all kinds of dangers.

The National Fire Protection Association reported an estimated 36,475 documented firefighter exposures to hazardous conditions. These conditions included asbestos, firefighting chemicals, fumes, radioactive materials and other substances that caused serious damage to the eyes and skin. Protective eyewear and other equipment are essential for rescue workers.

Tactical environments can also include recreational activities such as sports shooting, hunting, paintball, and airsoft, all of which can pose serious dangers to the eye. Despite the use of high-speed projectiles this group often neglects to use protective eyewear more than other tactical categories due to the recreational nature of the activity.

A recent 23-year study published in Pediatrics in January 2018 found that almost 442,000 children were treated in US emergency departments for recreation-related eye injuries, where adolescent had the highest rate of the eye injury. Injuries, caused by non-powder guns, which include BB, pellet, airsoft and paintball guns, increased by nearly 170% over the two decades. 79% of hospitalizations were linked to BB, airsoft or pellet guns and about 19% were caused by paintball guns. Almost all of these injuries could have been avoided if appropriate eyewear was being used.

Demonstrating the Capabilities of Tactical Eyewear

Eyewear is already common in the tactical environment and while wearing almost any eyewear is better than wearing no eyewear, there is a big difference between normal safety glasses and tactical eye protection. The ballistic protection, or the ability to protect the eyes from high-speed projectiles, is the key difference between normal safety glasses and those designed for tactical situations.

The leading ballistic tactical eyewear can actually stop bullets. Rigorous ballistic tests subject eyewear to projectiles at over four times the velocity of tests for standard industrial safety eyewear. It is not just the lens that should be resistant to hazards, but the frame too.

In order to be used in the tactical environment by the US military, protective eyewear should be able to withstand specific requirements on the caliber, grain, shape, and velocity of projectiles. All US military approved protective eyewear bears the APEL (Authorized Protective Eyewear List) logo and is listed on the official APEL website, whilst the US ANSI Standard offers guidance on civilian ballistic eyewear.

BE PREPARED FOR ANYTHING

While eyewear is already common in tactical environments, selecting the appropriate protective eyewear for a specific danger one might encounter can be a complex decision. Tactical settings are inherently changeable and the hazards one might encounter are often unpredictable. High-standard ballistic eyewear is essential to anyone around firearms and potential projectile objects; lasers, sunlight, fire, and weather also pose other types of threats.

Each model of eyewear offers different features and each conforms to certain standards. So it is important to identify the features you need most and ensure the eyewear meets the correct standards. 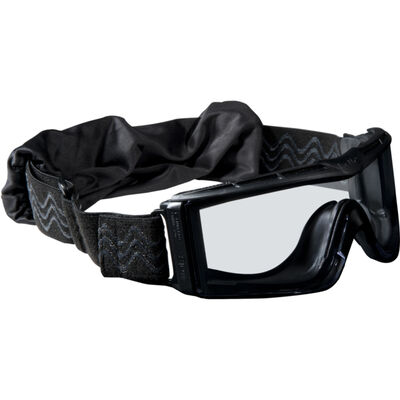 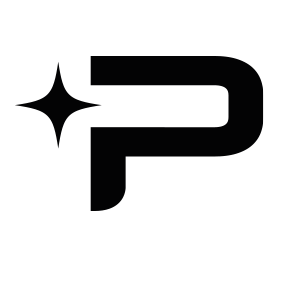 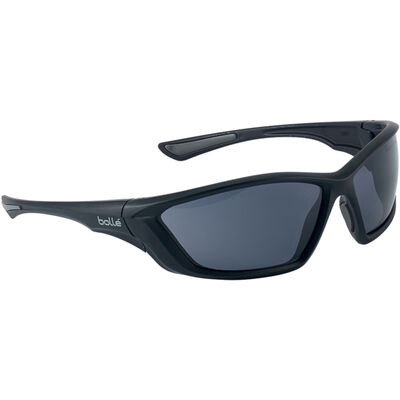