8 Ways to Protect Yourself from Harmful Blue Light of Screens

White light is made up of all visible colours but those at the blue end of the spectrum, what we call blue light, can be harmful. Screens produce blue light at higher levels than emitted by the sun. The increasing number of digital devices in our lives is exposing us to more screen time than ever before. While in many professional settings, employees now spend the vast majority of their working day staring at screens.

These factors are leading to increased eye strain, long-term retina damage, as well as a host of other physical, mental and emotional health disorders.

We should not expect the proliferation of screens to slow down anytime soon. In fact, we should expect an increase in the short to medium term. Thankfully, by assessing the way we use screens, we can find ways you can protect ourselves from the worst effects of extended screen use and high-frequency blue light exposure.

We stare at screens more than we sleep, and the trend is increasing as we adopt more devices. According to The Nielsen Total Audience Report: Q2 2017 the average adult in the US spends 10 hours 48 minutes consuming media. 8 hours and 58 minutes of that consumption is through a screen. That is up from 8 hours 42 minutes in 2016, and 7 hours 33 minutes in 2015. Meanwhile, a 2017 SleepScore Labs report found that 79% of the population sleeps less than the 7 hours - men average 5 hours, 45 minutes, while women average 6 hours, 9 minutes.

Smartphone usage has been the biggest driver of increased screen usage. The time US adults spent looking at smartphone screens more than doubled between 2015 and 2017. According to a study of Android users by Dscout, the typical smartphone user touches his or her phone 2,617 time every day. Heavy users interact with their phones more than 5,400 times per day. Whilst data released by Apple showed that iPhone users unlock their phones 80 times a day, that means looking at a screen five times per waking hour.

Time spent looking at screens, especially computer screen increases significantly in certain professions. In many industries, it has become normal for employees to spend their whole working day looking at computer screens. During breaks, these employees will often spend time on their smartphones, and after work, many will spend much of their evening watching television. These high levels of exposure to blue light from screens can have serious and potentially irreversible impacts on our health.

White sunlight, which we have become accustomed to over millions of years, is made up of around 25% to 30% blue light. This natural blue light reduces as a percentage of sunlight through the afternoon, guiding our bodies into night-mode. Whereas computer monitors and other electronic screens emit approximately 35% blue light and continue at these high levels well into the evening.

Recent research has shown that these high levels of blue light exposure can have a variety of implications for health and wellbeing. Long exposure to high energy particles at the blue end of the visible light spectrum can damage receptors in the eye. While the use of artificial light at night can trigger a variety of sleep problems, as well as physical, emotional and mental health disorders.

All blue light induces photochemical stress that can damage retina cells in the eye. The retina is a nerve cell layer in the back of the eye that contains neurons known as photoreceptors that sense light, resulting in impulses that are transmitted via the optic nerve to the brain. The retina is protected by a layer of pigmented cells known as the retinal pigment epithelium (RPE).

The RPE nourishes retinal nerve tissue by transporting molecules into and out of the retina, forming a pair of biological sunglasses that can absorb blue light. When eyes are exposed to high levels or long periods of blue light, their ability to absorb blue wavelengths and repair the damage is reduced. This can potentially leave the retina exposed to irreversible cell destruction from high energy blue light.

Our internal clock, or circadian system, is trained to respond to natural light. The blue-rich light of the morning sun blocks the release of the sleep hormone melatonin, waking us up. Whereas the red tones of the setting sun, or the absence of blue light, reverses the process and readies the body for sleep.

In modern society, artificial light at night fools the circadian system into thinking it’s day. Exposure to the blue wavelengths of light emitted by screens in the hours before sleep can affect your body’s ability to rest and trigger sleep disorders. The circadian system also influences fundamental bodily systems like digestion, blood pressure, temperature regulation, and metabolism, which can lead to much more serious conditions.

Mood disorders are commonly associated with light and the circadian system. According to the American Psychiatric Association, a range of mood disorders can be characterized by sleep and circadian rhythm disruption or precipitated by an irregular light cycle. “Sleep disruption is a diagnostic criterion for major depression, bipolar disorder, post-traumatic stress disorder, generalized anxiety and other mood disorders."

Circadian regulation is present in many of the systems believed to govern mood. According to ‘Brains in the city: Neurobiological effects of urbanization,’ by Lambert KG, et al., “widespread exposure to light at night that disrupts circadian function may contribute to the prevalence of mood disorders.”

A 2017 study associated circadian disruption with diminished ability to repair DNA, thereby raising the risk of cancer. “If awake at night the body has reduced capacity to repair and clear oxidative DNA damage,” said project leader, Dr Parveen Bhatti. “Over time, this accumulation would likely increase the risk of cancer across multiple sites as has been observed among shift workers,” she added.

Luckily there are several ways to protect yourself from the Blue Light. While eyewear is essential to circumvent the effects of high-intensity light, there are many other things you can do in addition to ensure your safety. Some of which are as simple as rearranging your workspace. By taking the following safety measures you can avoid the negative effects caused by blue light.

The layout of a workstation is an important element of reducing eye strain when using screens.  The top of the monitor, for example, should be in line with your eyes and 20-30 inches away. Meaning you should looking down by 15-20 degrees to see the center of the screen.

Low ambient light levels force the eyes to work harder to process extreme differences in contrast. Similarly, very bright light, such as a window, can create glare from in front or behind the screen that also strains the eyes. An ideal workstation layout would place the window perpendicular to your computer screen, providing natural light without glare.

Adjusting the brightness of your screen is a simple way to reduce eye strain. Reduce or increase brightness to match the ambient light levels so the eyes don't have to deal with the contrast.

It is possible to support your eyes’ natural protection by consuming foods or supplements rich in key nutrients. Lutein and zeaxanthin occur naturally in foods like spinach, kale and other leafy greens. While meso-zeaxanthin can be found in certain fish. Nutritional supplements are also available to ensure adequate daily intake.

“The naturally occurring retinal antioxidants, such as lutein and zeaxanthin, can’t be regenerated fast enough to keep pace with the amount of damaging blue-light saturating the immediate environment,” said Michael A. Smith, MD. “We are all quickly becoming lutein deficient. And since the blue-light-emitting devices aren’t going anywhere, the risk of macular degeneration is rising. Macular pigment density must be preserved with daily lutein and zeaxanthin supplementation.”

"THE NATURALLY OCCURRING RETINAL ANTIOXIDANTS, SUCH AS LUTEIN AND ZEAXANTHIN, CAN’T BE REGENERATED FAST ENOUGH TO KEEP PACE WITH THE AMOUNT OF DAMAGING BLUE-LIGHT SATURATING THE IMMEDIATE ENVIRONMENT"

A variety of treatable eye conditions could worsen the impact of blue light but we often neglect eye tests. A survey by Simplyhealth in the UK found that over half of people between the ages of 40 and 75 have not had a recent eye test, despite optometrists recommending over 40's have a test every two years.

Dr Beth Lennox, a doctor of optometry at Cambridge Eye Care in Ontario Canada, promotes the 20-20-20 rule. Every 20 minutes, take a 20-second break and focus your eyes on something at least 20 feet away. “This simple rule will give your eyes a much-needed break and reduces eye strain and other computer-related eye stress,” explains Lennox.

The light entering the eyes must be filtered for complete blue light protection. A high-quality blue light blocking glasses act as a personal blue light filter, protecting the wearer from all sources of blue light. These filtering glasses have already become popular with computer gaming enthusiasts who spend hours in front of the screen. However, it’s not just gamers that could benefit, most people are exposed to potentially dangerous levels of blue light.

Office workers spend much of their day staring at a screen and are also being exposed to bright lighting that is rich in blue light. It is not just the office that exposes workers to dangerous levels of blue light however, many other workplaces present similar problems. Workers in research laboratories, automotive plants, construction sites, retail stores, as well as oil, gas, mining and power facilities, face blue light from a variety of sources.

A study of blue light by researchers at the University of Toronto tested this theory.

There is a wide variety of blue light blocking glasses on the market with varying levels of protection. Glasses and goggles that conform to the European Standards for Eye Protection – EN166 – have a higher standard than the US and Asian equivalents. This European Standard is applicable to all types of individual eye protectors used against the various dangers that may damage the eye or impair vision.

Anyone who spends significant amounts of time looking at screens must consider the impact that blue light exposure has on their health. Screen culture is here to stay but by adopting these simple solutions we can reduce the risks to vision as well as a host of other physical, mental and emotional disorders. To protect yourself, your family and your employees, choose the protective measures that suit your needs and make sure you keep it up.

B713
Blue light safety glasses
Price on request
OTHER VERSIONS 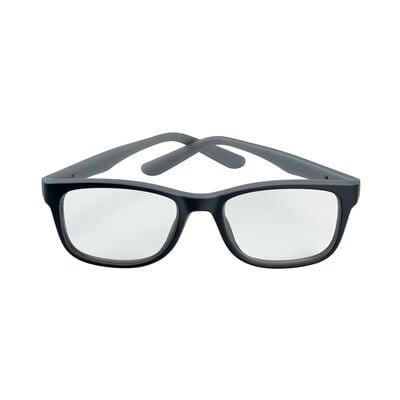